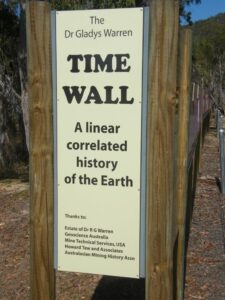 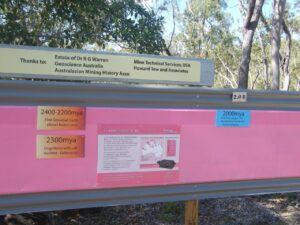 Ted Eggleston and Stella Searston have a mutual interest in tin deposits. Herberton, a small village in North Queensland, Australia, was an artisanal tin mining field with its heyday in the 1880s and 1890s. A group of committed local volunteers, together with the then Herberton Shire Council, banded together a dozen years or so ago, and established the Herberton Mining Museum and Visitor Center, which seeks to interpret the local mining history.

In 2018, Mine Technical Servcies Ltd. (MTS) decided to support an initiative of the Herberton Mining Museum to build a “timewall”, which would lay out the earth’s geological history to a linear scale as a time wall along the base of the Mining Museum car park, describing 4.6 billion years of earth history in a 46 m long (150 ft) walk-along visual display.
Although Covid-19 put a stop to the opening ceremony as planned, MTS was recently sent a set of photographs of the wall as it is now completed.
We congratulate the Herberton Mining Museum, its trusty volunteers, our wall co-sponsors, and all those who helped bring the wall to completion. A special thanks from us at MTS to an amazing geologist who had retired to Herberton, and whose estate helped construct the wall, Dr. R. Gladys Warren. 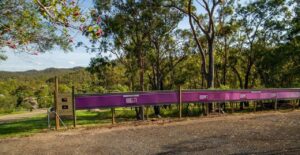 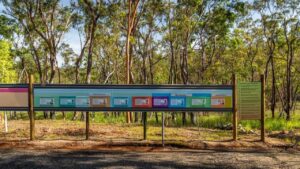 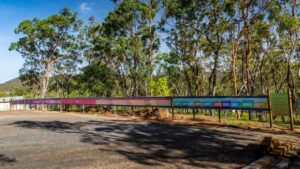